RumChata Pudding Shots are just the thing to spice up the evening — figuratively and literally. They have a nice spiced cinnamon flavor, and they’re just so fun to look at! They’re basically a little beach in a cup. Made with a creamy liquor and topped with yummy gummy candies, there’s something for everyone in this pudding shot recipe!

RumChata is simply perfect in pudding shots! They can be more or less alcoholic, depending on your tastes, and decorated for any theme.

Rumchata is a creamy liqueur that’s spiced up with some cinnamon. It’s a blend of Mexican horchata (a cinnamon rice drink) and rum. It has a yummy vanilla flavor that goes well with many different mixed drinks — but especially a pudding shot recipe. But honestly? You can even drink it on its own!

The cinnamon and vanilla notes in Rumchata are heavenly on their own, but what about in mixers? If you love chocolate, coffee, or caramel drinks, then you should always have a bottle of the liqueur on standby.

There’s a creamy cocktail for every party or holiday, guaranteed! Have you tried a Nutcracker cocktail at Christmas? Or a Leprechaun’s Lunch cocktail on Saint Patrick’s Day? You just have to!

You can really easily double or triple this recipe to make enough for an entire crowd. And you should! Otherwise, how is everyone going to get their seconds?? (And thirds, and fourths…)

If you want thicker Rumchata pudding shots, you can use a little less milk. Try adding just 1 cup of the milk, adding more as you go, until you get to the consistency that you want!

To make this pudding shot recipe less alcoholic, simply remove some of the alcohol and compensate by adding more milk. You can even replace all of the alcohol with milk, for a  kid-friendly, non-alcoholic treat!!

Storage and Prep Ahead Instructions

You can keep RumChata pudding shots in the fridge for up to 4 days, so feel free to prep them a couple of days ahead of time! If you do, then wait to add the graham cracker crumbs and candy until you’re ready to serve. Otherwise, the crumbs will get soggy and the candy will get stale. Not very appetizing!

When storing in the fridge, put the lids back on the cups until ready to serve. Give them each a little stir before adding the toppings! It helps with the presentation.

Can you mix RumChata with soda?

It may be tempting, but no way! RumChata is a dairy-based drink, so any acidic or carbonated mixers are a big no-no. It’ll have an awful texture and flavor. So, stick with other liqueurs and creamy ingredients.

Does RumChata need to be refrigerated?

Nope! It has preservatives that keep it nice and spicy for a good long while — up to a whole year after being opened.

Other Fun and Easy Party Shots 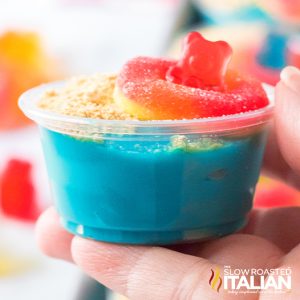