Cheesecake ice cream is tangy- sweet, with bits of graham cracker crust throughout. Make this no churn ice cream recipe without a machine!

Homemade desserts always seem to taste better than what you can buy at the store, and frozen treats are no different.

No special equipment needed — In fact, it’s easier to make ice cream without an ice cream maker than you might think! Condensed milk ice cream comes out just as creamy as custard-based recipes, but without the extra effort and steps.

You can use it as a base to create just about any flavor ice cream you might be craving!

Sometimes I just can’t decide between cheesecake or ice cream, and then I think, why not both? When you combine these two desserts together, you get one incredible, mind-blowing frozen dessert!!

Crunchy bits of graham cracker are swirled throughout the pan, adding texture to the rich and creamy frozen treat. You can even add mix-ins to to create other flavors.

Skip a special trip to the store and create this refreshing dessert with only 4 ingredients and 10 minutes of your time!

This no churn ice cream recipe uses sweetened condensed milk as a base instead of eggs or custard, which is why no machine is needed.

If you decide to go the more traditional route, you will need to follow the additional steps needed for whatever recipe you decide to make.

How long is homemade ice cream good in the freezer?

No matter the recipe, your sweet treat is best enjoyed within a week or two of making it. If it doesn’t contain fresh fruit, it can last for up to 2 months.

What can I add to cheesecake ice cream?

Swirl in some strawberry syrup dessert topping or cherry pie filling, or add a bit of lemon zest for a bright, refreshing flavor. You could also take some inspiration from my Monster Cheesecake recipe and swap out the regular cake slices for these instead!

Here are some more mix-in and topping ideas for your homemade ice cream:

If you’ll be using homemade cheesecake, I recommend making that a day or two in advance. It’s important for the dessert to be fully chilled and set before it’s mixed into the creamy base.

Otherwise, whip up the no churn ice cream recipe early in the day. This way, it’ll be ready in time for an after dinner treat!

How To Store Homemade Ice Cream

Store your frozen dessert in a metal loaf pan, covered tightly with plastic wrap, or transfer it to a freezer-safe airtight container.

Either way, this cheesecake ice cream will last about two months in the freezer — if you even manage to have leftovers! 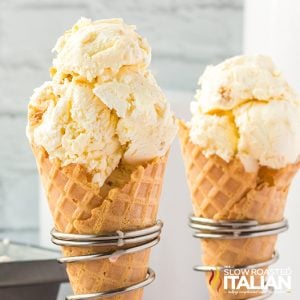 Tried this recipe?Let us know how it was!
Share
Pin
Email