Sweet Southern Cornbread is the epitome of soul food in a skillet! Moist and tender, it has a scrumptiously sweet, tangy flavor from buttermilk, and a smooth and buttery texture! Best of all, this quick cornbread recipe can be whipped up and on the table in less than 30 minutes!

Personally, I just can’t eat a bowl of chili without some cornbread on the side.

But honestly, sometimes I crave that sweet taste all on its own. I just slather on some honey butter and I’m good to go!

Soft, sweet, and simply Southern – a dish doesn’t have to be complicated to be delicious! It’s the golden puzzle piece that will complete the perfect meal.

Savory, saucy, or soupy – almost any main course can use a litting sweetening with a slice of fabulous buttermilk cornbread

Buttermilk has a way of making everything soft, subtly tangy, and mouthwatering down to the last crumb.

A regular cake, a creamy pie, and even waffles at breakfast time!

If you’re making it for a later meal, remove it from the skillet and wrap it up in some plastic wrap or store in an airtight container.

Leftovers are good for up to 4 days in the fridge, or up to 1 month in the freezer!

You definitely don’t want to keep in the skillet after it’s done. The cast iron retains heat for a good while after it’s off the stove and could dry out the bread.

What is the difference between cornbread and Southern cornbread?

Regular, or “Northern,” cornbread isn’t nearly as sugary as your traditional Southern cornbread recipe. It tends to be crumbly and less buttery.

A lot of the difference comes from the amount of eggs used – Southern recipes use more, making the bread more cakey and fluffy.

Can you make sweet Southern cornbread without a skillet?


Yes, you can – no cast iron necessary! A regular, butter-greased 8” square baking dish will do. Bake for 25 minutes.

Can I use powdered sugar instead of granulated sugar in cornbread?


Generally speaking, it’s best to use granulated. However, you can follow the general rule of thumb for this sweet skillet cornbread recipe: substitute 1 cup of granulated sugar with 1 ¾ cups powdered. 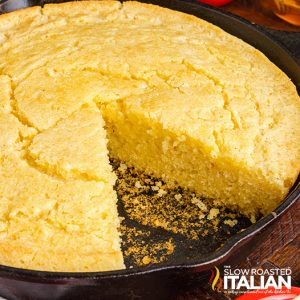 Store in an airtight container on the counter or in the refrigerator for 3-4 days, or wrap well and freeze for up to 1 month.
For tender, soft cornbread, do not overmix the batter. Lumps in the batter are fine.
This is a soft, thick, cake-like cornbread. It is sweet and delicious, without any grittiness. Batter can also be baked in an 8-inch square baking dish for about 25 minutes. Use the two tablespoons of butter to grease the baking dish and put the remaining butter into the batter along with the rest of the melted butter. Skillet cornbread is fun to serve straight out of the skillet. If you are not cutting and serving it right away, I recommend removing it from the cast iron skillet. Cast iron holds heat for a long time and the cornbread will continue cooking (may dry out) if you leave it to sit in the skillet after it comes out of the oven.