Cheesy soups are the perfect dinner option for cold winter nights because the rich flavors are so comforting.

My Chicken Broccoli Cheddar Soup Recipe is another quick and easy meal that’s made all in the same pot. Plus, the addition of jasmine rice makes it extra filling.

Crockpots are also a great way to skip a pile of dishes and have dinner waiting for you at the end of a long day.

Slow Cooker French Onion Soup spends all day cooking to get that rich caramelized flavor throughout. Just pop your bowls under the broiler at the end to toast the bread and melt the cheese on top!

How To Make Beer Cheese Soup

First, crisp the bacon and brown the ground beef in your pot. Then, season and deglaze with the beer.

Simmer with the half and half and stir in the cheese until melted. It’s that simple!

Enjoy as is or top with whatever you normally like on your burger.

What’s the best way to reheat this soup?
Heat in bursts in the microwave or on the stove over low heat until warmed through.

Stir frequently so it heats evenly and doesn’t separate, and add a splash of broth to thin it out if needed.

Can I freeze bacon cheeseburger soup?
Because so much of the soup is half and half and cheese, I wouldn’t recommend it.

Dairy is notorious for separating when once thawed and reheated, so the texture of this soup would probably become unpleasant.

Is there a beer free alternative?
The beer lends a flavor that you will not get with other liquids, and the alcohol cooks off either way.

However, feel free to replace it with beef or chicken stock for an alcohol free version.

Can I make bacon beer cheese soup in the crockpot?
I don’t see why not! I would recommend making the bacon and ground beef on the stove as directed and still deglaze the pan with the beer.

Then, combine the ingredients in the slow cooker and cook on low for 4 to 5 hours or until the cheese is fully melted.

To see us make the recipe from start to finish, watch the video at the top of this post. 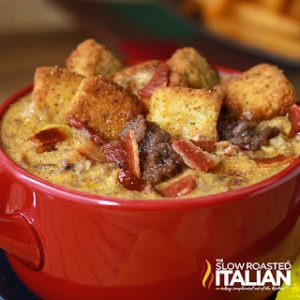 Half and half is a US dairy product made up of half cream and half milk. Feel free to substitute accordingly. You may also use heavy cream, which would make the soup much more rich. 10/14/15 This recipe was edited to reduce the Montreal Steak Seasoning to 1 tablespoon. It was originally published with 2 tablespoons of seasoning.