This Mandarin Orange Salad tastes just like a creamsicle or Orange Julius. Enjoy it for dessert tonight – it comes together in just 15 minutes!

It’s refreshing enough for a hot summer day and is a great addition to any potluck or barbecue.

Transform your favorite desserts into cheesecake salads with my banana split or caramel apple candy versions. Both are rich and luxurious enough to satisfy any sweet tooth!

If you’re craving more citrus, I have one featuring lemon and summer berries or another made with tropical fruits and nuts for a little extra crunch.

How To Make Mandarin Orange Salad

While there are several steps to this recipe, it’s really quite simple to put together!

Using an electric mixer, beat together the ingredients for the cheesecake mixture in stages. Be sure that everything is well incorporated before adding the next one.

In a separate bowl, make a batch of homemade whipped cream and fold it into the other bowl.

Then, gently stir in the fruit and mini marshmallows until they are evenly distributed throughout. It’s important to go slowly since the mandarins break apart easily.

Spoon the orange dreamsicle salad into your favorite serving bowl and top with more marshmallows and fruit. Even a sprig of fresh mint would look lovely!

Can I make this mandarin orange salad ahead of time?

Yes, simply prepare the cream cheese mixture, fold in the whipped cream, and store covered in the refrigerator.

It’s best to stir in the marshmallows and mandarins just before serving since both will soften and break apart the longer they sit.

How long will orange dreamsicle salad last in the refrigerator?

Cover the bowl tightly with plastic or transfer to an airtight container and refrigerate for up to 2 days.

It’s probably safe to eat for another day or two after that, but the texture will become soft and watery.

Can I use regular pudding mix instead?

Unfortunately, no. Anything other than instant won’t set up properly, so you may need to find it online if your local store doesn’t carry that variety. You could also substitute vanilla or french vanilla instant pudding. 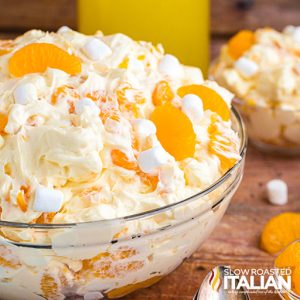 Storage: Cover with plastic wrap or store in an airtight container in the refrigerator for up to 2 days.