If you have been reading our site for a while, you probably know that my mother-in-law Gigi is a peanut butter and chocolate freak. I mean seriously, I have been making her a Reese’s dessert for every holiday and occasion for several years now. A person tires of making the same thing over and over.  LOL. In the mood for sweet but don’t feel like baking, try this no bake peanut butter cheesecake.

So, for Mother’s Day this year I brought her a new brownie creation topped with chocolate chip cookie dough and she was so excited to see the tray, until she opened the wrapping.  I could see the utter disappointment in her eyes. She wanted that peanut butter and chocolate dessert so badly. It is amazing to have someone love your creation that much, so I can’t really complain.

I mean 3 years ago she did inform me that there was never to be another gift, only that Reese’s dessert. Needless to say, when her birthday came around this year I decided to give her exactly what she wanted, but with a fun twist.

Chad made me a homemade birthday cake this year. He took a brownie recipe and made a cake out of it. I was amazed by his creativity and decided to take that inspiration and put a fun twist on Gigi’s cake. But when it comes to Gigi the more peanut butter and chocolate the better so I started by stuffing Reese’s Peanut Butter Cups into the brownie layers. Then I made a frosting that tastes like peanut butter fudge. Oh my heavens, I had a hard time not eating the whole bowl.

Of course, it has to be pretty so I added Reese’s decorations to the cake too.

Well, you are wondering how it went over I guess. She was crazy about it! YES, SCORE. 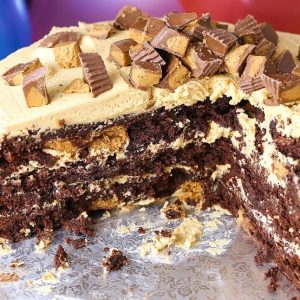 Donna Elick
Reese’s Peanut Butter Cup Extreme Brownie Cake starts with a simple brownie recipe that is fully loaded with peanut butter cups. Then, a peanut butter frosting that is second only to your grandma’s peanut butter fudge is the only way to do those layers any justice. The rich and creamy peanut butter frosting will blow your mind. It is so good, I couldn’t keep my hands off it. It is nearly addictive.
5 stars from 1 review
Prevent your screen from going dark
Tried this recipe?Please comment and review!
Print Recipe
Prep Time 25 mins
Cook Time 20 mins
Total Time 45 mins
Course Dessert
Cuisine American
Method Oven
Servings 18

This cake freeze very well. Be sure to wrap well and defrost for 30 minutes before eating.