Lazy Day Bacon Cinnamon Rolls are the breakfast of your dreams. Ooey gooey tender cinnamon rolls fully loaded with smoky bacon. The combination of salty and sweet is enough to blow your mind. It is such an easy recipe and ready to go in the oven before it is done preheating.

The only problem with this incredible breakfast is that you may want to eat it all yourself.

Sweet treats call my name and I have been seen sweet bacon everything for quite some time now. I have been really wanting to try some dessert with bacon in it for a while.

Or sweet breakfast, speaking of, I have seen bacon cinnamon rolls made with whole pieces of bacon rolled up in the cinnamon roll, which sounds great (in theory)…

The problem for me was that the bacon did not get crisp enough for me to enjoy it until the cinnamon rolls were way over cooked. Everything I thought of could not change that, except by par-cooking the bacon.

Which that entire thought made this treat way more work than I was willing to put into it. So, it is not wonder I called these Lazy Day Bacon Cinnamon Rolls. LOL What I ended up doing is taking my favorite store bought cinnamon rolls and unrolling them and pressing bacon crumbles into the dough.

You could use bacon that has been cooked and chopped, but I opted for my convenient bacon crumbles that I buy at Costco. Then you just roll them back up. If some of the filling falls out, just scoop it up and press it back it.

No one will be the wiser. Separate the cinnamon rolls and place them in your baking pan. Bake according to package directions and then spread icing over top.

I dare you to wait until these are cooled off. It isn’t possible. Just the aroma will have your mouth watering. We also have a quick and easy air fryer cinnamon rolls recipe that you can add bacon to as well.

Other Easy Dessert Recipes With Cinnamon 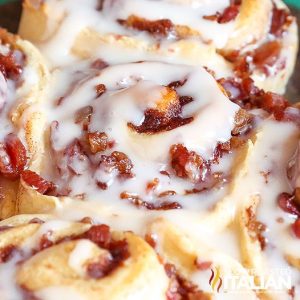 Donna Elick
Easy Bacon Cinnamon Rolls are the lazy day breakfast of your dreams. Ooey gooey tender cinnamon rolls are fully loaded with smoky bacon. The combination of salty and sweet is enough to blow your mind. So easy and ready to go in the oven before it is done preheating. The only problem with this simple recipe is that you may want to eat it all yourself.
5 stars from 1 review
Prevent your screen from going dark
Tried this recipe?Please comment and review!
Print Recipe
Prep Time 5 mins
Total Time 5 mins
Course Dessert
Cuisine American
Method Oven
Servings 5