Cinnabon cinnamon rolls can be made easily at home with this copycat recipe! Soft sweet rolls with thick cinnamon-sugar filling and ooey-gooey cream cheese frosting that you’ll remember long after the Cinnabons are gone!

Although there is probably a Cinnabon in every mall and airport across the country, I wasn’t introduced to the heavenly bakery until I moved to Arizona. I guess I always thought, “So what?  It’s a cinnamon roll”.

Boy, did I underestimate how delicious they are!!

It wasn’t long after that day at the mall when Chad and I fell in love. Was it the cinnamon roll?  Who knows, but it sure didn’t hurt!

A soft, sweet yeast-risen roll with thick brown sugar and cinnamon filling, and the most scrumptious cream cheese frosting you will ever eat.

We are so excited to have recreated a Cinnabon cinnamon roll recipe to share with you!!

If you enjoy the flavors of sweet cinnamon and sugar, we also have recipes for cinnamon sugar donuts, French toast, and homemade cinnamon swirl bread, too!

A fabulously soft, sweetened bread made with egg and buttermilk is the base for Cinnabons classic treat, and its also the base for ours.

We make our filling with butter, cinnamon, brown sugar, and a little cornstarch to thicken up the filling (so it doesn’t all ooze out, thanks to a great tip from a recipe message board).

The Cinnabon cinnamon roll icing is, of course, the star of the show! A vanilla cream cheese frosting with a hint of lemon to really make it stand out.  It’s enough to make your thoughts linger long after you have devoured your first cinnamon roll.

Kitchen Tools You Will Need for Cinnamon Rolls

How to Make Cinnabon Cinnabon Rolls Without a Stand Mixer

No stand mixer? No worries! You can mix the dough by hand if you do not have a stand mixer.

The easiest way to prep this recipe is to do most of the work the day before you want to serve the rolls. Then all you have to do is pop them in the fridge and bake them fresh the next morning. They are our absolute favorite.

After much back and forth with the family, we have finally decided on what to have for Christmas breakfast, and it’s going to be these outrageous sweet cinnamon rolls.

They really are the best holiday brunch treat! If you want the ooey-gooey goodness of Cinnabon rolls, but you don’t want to go out for them, make them with this Cinnabon copycat recipe!! 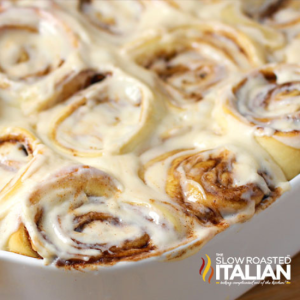 You can mix the dough by hand if you do not have a stand mixer. Add water, yeast, and sugar to a large bowl. Once the yeast blooms stir in the buttermilk, eggs, and butter. Mix with a spoon and add the salt and flour. Stir until you can no longer stir with a spoon. . Turn dough out onto the floured countertop and knead for 3-5 minutes until the dough is no longer sticky. Proceed with remaining instructions. OVERNIGHT PREPARATION: Prepare cinnamon rolls, once you put them into the baking pans place them in the refrigerator. They will slowly rise overnight. Remove them from the refrigerator in the morning and bake. They may need a few extra minutes to get the chill off in the oven so be sure they are cooked through before you pull them out. Then frost as the recipe describes.