Bacon Burger Bombs are a modern twist on a family tradition! Stuffed burger pockets are perfectly seasoned and loaded with bacon. Soft and tender dough envelopes the bacon-flavor explosion. This simple recipe is sure to become a regular in your kitchen too!

As far back as Chad can remember his family has been enjoying fatayer for Christmas eve dinner. His mom got the recipe from one of her friends’ moms when she was just a teenager.

Her family recipe is a spin on the traditional Syrian/Lebanese meat pie. Perfectly seasoned beef and potatoes are wrapped in a bread dough and baked.

Chad’s mom (Munchkin calls her Gigi) and bonus dad (Pop Pop) have been preparing Christmas eve dinner for everyone from the beginning. Then one year (when I was pregnant with Munchkin) they invited us over to help.

Now, I have to tell you that this was a major big deal. Taking part in the preparation of fatayer was an exciting day. To give you an idea, Chad’s family feels the same way about fatayer as my family feels about Christmas lasagna and Papa’s Italian Braciole. So, you can imagine what a big deal this was.

So, over the years it has become a tradition for us to get together Thanksgiving weekend and prepare the fatayer for Christmas. We make it and freeze it. Then pop it in the oven on Christmas Eve and it is as fresh and delicious as the day it was first made.

FUN FACT: The original idea for our bombs series came from this family tradition. Funny how one thing can have such an incredible impact. They are THAT good!

So, as you can see even Munchkin gets in on the prep work. She has been helping since she was 2. Gigi prepares the filling, Munchkin and I roll out the dough. Chad and Gigi stuff and seal them, and Pop Pop mans the oven.

It is quite a process. We have been wanting to share the family recipe for years, and finally this year, Fatayer day was at our house!

While we were making the longtime family recipe I said, “I bet sweet potatoes would be awesome in here”. Chad said and BACON!!! So we thought about it and decided to put a modern twist on the family recipe.

I am so excited to share with you our Bacon Burger Bombs. Loaded with beef, cherry wood smoked bacon and sweet potatoes that are perfectly seasoned.

Everything is stuffed in a soft and tender bread dough, then brushed with bacon drippings and baked to perfection. OH MY WORD!!! This ground beef appetizer is SO tender and bursting with flavor!

I have never had a fatayer like this before. So naturally, we decided to change the name. It is so rich and decadent, the bacon flavor comes through in every bite!

We devoured them, and they may become part of the family tradition. Thank you for sharing in our traditions. What is your holiday tradition? 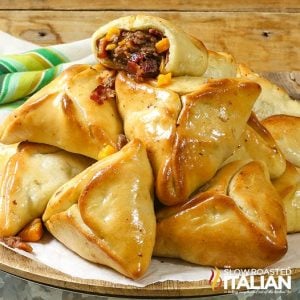 To defrost the rolls quickly, place dinner rolls on a microwave safe plate and microwave on defrost for about 3-4 minutes (or until dough is no longer frozen, but not cooked).