These Big Mac bites taste just like the famous burger, but in poppable form! Wrap cheese-stuffed meatballs in dough and bake until golden.

Add a fun twist to weeknight dinners or serve up a platter of these Big Mac bites the next time you host the big game. Don’t forget the special sauce for dunking!

Need a make-ahead option? Capture all of those same iconic flavors in a big bowl of pasta salad instead. Prep everything in the morning, then toss it together and chill before everyone arrives.

For more fast food favorites, try a homemade version of Taco Bell’s Mexican Pizza or a spicy chicken sandwich like the one from Chick Fil A!

Like many of my bomb recipes, you’ll be sealing a tasty filling inside of thawed dinner roll dough.

Combine the ground beef with onions, pickles, and seasoning. Then, form 24 evenly sized meatballs with a piece of cheese in the center.

For the best results, pan fry the stuffed meatballs before wrapping them in the dough.

This helps seal the meat around the cheese, reduces some of the liquid that would make the Big Mac bites soggy, and adds another layer of flavor.

Plus, having the center of the cheeseburger bombs warm from the start helps them cook a bit more evenly.

Once they’re all sealed in the thawed rolls, brush with egg and sprinkle with sesame seeds. Bake until golden brown and serve with a side of big mac sauce!

How do I store leftover cheeseburger bombs?

Once cooled, transfer leftovers to an airtight container and refrigerate for 2 to 3 days.

Reheat in the microwave, oven, or air fryer until warmed through.

Do I have to pan fry the meatballs first?

When I tested these out, pan frying gave the best results both in overall texture and preventing cheese from oozing out.

I did try wrapping and cooking the raw meat, but the dough didn’t cook as well and there was some wetness in the center.

Baking the meatballs before wrapping was the least successful method. I tried various amounts of time, and they all had their drawbacks. 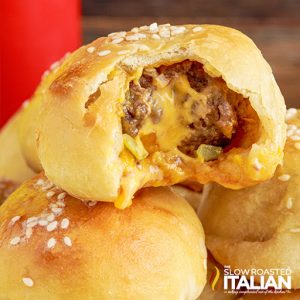 For the best results – pan fry the stuffed meat balls before wrapping them in the roll dough – this helps seal the meat around the cheese, reduces some of the liquid that could make the bread soggy, adds some flavor, and gets the center of the bombs warm to help the dough get a good start cooking. You will still lose a little of the cheese on some of the bombs between pan frying and then baking, but this method was the most successful to reduce cheese oozing out. (Other methods I tried included baking the meat balls in the oven before wrapping in dough – I tried various amounts of time and they all had their drawbacks. I also tried wrapping and cooking the raw meat, which was probably my second favorite method, but the dough didn’t cook as well and there was some wetness. American cheese really gives a true Big Mac taste to the bombs, but you could also use a mild or medium cheddar – cheddar will not ooze as much as the American cheese. It’s really important to mince the onions quite small so that they cook through in the relatively short cook time. Keep the chopped pickles small also so they don’t prevent the meat from sticking together and forming a nice ball around the cheese. Store leftovers in an airtight container in the refrigerator for 2-3 days.