Crockpot Potato Soup is a thick and creamy cheesy slow cooker soup that your whole family will enjoy! Loaded with flavorful bacon, herbs, potatoes, and cheese, there’s no way anyone will leave the kitchen table unsatisfied. Don’t skip the video in this post — check out the techniques that make this easy soup recipe the most delicious recipe to boot!

Who doesn’t love a good loaded potato stew? No one I know! And this slow cooker potato soup sure is loaded – onions, cream, herbs, bacon, and cheese? Yes. please!

Trying to make this recipe work on the stovetop? Let me recommend my stovetop loaded baked potato soup instead. It’s much better suited for what you’re looking for!

Think this is the only crock pot soup recipe I have? Think again! Try out my classic chicken noodle or saucy taco crockpot soup that you can slow cook to perfection.

Leftovers should cool to room temperature before being added to an airtight storage container.

It can be chilled for 3 days or frozen for up to 6 months – though, I wouldn’t necessarily recommend freezing!

The consistency of the potatoes and creamy broth changes when frozen.

Reheat right on the stovetop, keeping it on a medium heat and stirring until warmed through. Store without toppings and add them fresh once it’s been reheated!

Can I make crockpot potato soup without evaporated milk?

Sure, you can! Any cream can be used in its place. Consider that this will make the broth, well, creamier and richer in flavor. Thin a heavier cream with regular milk, or just use regular milk instead if you’re going for a thinner broth.

How do you keep potato soup from getting gummy?

The key is to cook your potatoes in larger pieces and smash them afterwards, just before the end of baking. And we’re smashing, not pureeing, to also avoid that gumminess that you sometimes find in loaded potato soups.

The type of potato used can also be a factor. See the ingredient section above for tips on choosing the best potatoes for stewing!

Do you have to peel potatoes for potato soup?

That’s usually a matter of preference, but I actually recommend peeling the spuds for this one – and that says something coming from me! Leaving the skins on will make smashing less effective and also result in bits of potato skins floating around in the broth. 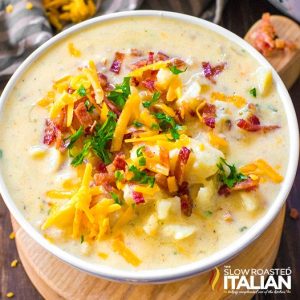 If the soup is too thick, add more chicken broth. The soup can be refrigerated for up to 3 days.