Cinnamon roll monkey bread combines all the best parts of these two delicious treats! Make this crockpot recipe for breakfast, brunch, or dessert.

This recipe is so much easier to put together than mixing and rolling out dough for a pan of rolls. With a drizzle of sweet frosting, you won’t be able to taste the difference!

If you’re craving something more savory, I have another easy monkey bread recipe that’s loaded with sausage, eggs, and cheese.

Or, try caramel and cinnamon pull apart bread that tastes like apple pie or Bananas Foster!

Thaw a package of frozen dinner rolls, then cut them into quarters. Coat the pieces in butter and toss in a mixture of cinnamon and sugar.

Add them to a buttered crock pot and cook on High until they are fluffy and cooked through. Start checking at around 1 ½ hours, though it can take up to 3 hours total.

Just before the dough is done, whip up the cream cheese frosting. Drizzle it over the top and serve immediately. Or, turn the dish out onto a serving tray before icing.

To see us make this from start to finish, watch the video in this post.

What brand of frozen dinner rolls do you use?

I used Rhodes for this recipe, and it’s also what I use for my famous bombs! You could also whip up a batch of homemade white bread dough if you prefer to use that.

Does cinnamon roll monkey bread need to be refrigerated?

It should be fine at room temperature if you leave off the icing, otherwise it will need to be chilled.

Because the texture is more doughy than traditional baked versions, it won’t become tough in the refrigerator.

Transfer leftovers to an airtight container and warm individual portions in the microwave. 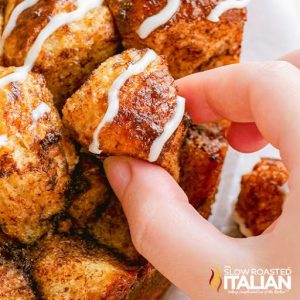