KFC Gravy Recipe is simple and quick to make, and so versatile!! It’s super thick, with a rich flavor and a consistency that’s smooth as glass. Believe it or not, it takes 15 minutes to make restaurant quality brown gravy from scratch at home! It’s effortless – I’ll show you how!

Have you ever ordered the mashed potatoes from KFC® and thought, “Wow, I wish I could make gravy this good!”

Well, now’s your chance to enjoy it any time of the year! After all, a great gravy can turn an average dinner into a 5 star meal with just one spoonful!

I honestly believe that brown gravy from scratch is the best gravy for mashed potatoes, and KFC gravy hits the bullseye!

It cascades over the potatoes, coating every bite in a velvety, savory flood of flavor.

And if it spills onto your chicken or beef, rolls, or veggies, that’s even better! It’s delicious on everything!

At the end of the day, though, you can’t make a KFC gravy recipe without also making KFC mashed potatoes!

I also have recipes for gravy to serve with turkey and a faster and easier 5-Minute brown gravy recipe, for when you’re really in a time crunch.

What is the gravy at KFC made of?

The restaurant uses a simple combination of gravy powder, water, and – their secret ingredient – chicken crackling.

This is a collection of the browned bits and pieces leftover from frying their world famous chicken.

Does KFC use brown gravy or chicken gravy?

Technically, it’s a brown gravy with some leftover chicken bits from their fried chicken mixed in.

To replicate that flavor in our KFC gravy recipe, we use beef bouillon in addition to a bit of chicken broth.

Why is my gravy always lumpy?

Lumps in gravy can happen if you try to incorporate the liquid into the fat and flour mixture too quickly.

The key to a smooth gravy is to add the liquid ingredients to the roux slowly, whisking all the while. Take your time and keep the heat on medium. Otherwise, the flour quickly reacts to the hot liquid and clumps will form.

Do you love the food at KFC? You’ll flip for this KFC Chicken Pot Pie recipe!

I probably don’t need to tell you to serve your gravy right away, while it’s still piping hot.

But if you happen to be making this recipe ahead of time, you can do so up to 7 days in advance without too much of a change in taste and consistency.

To reheat, return to a pot on the stove and bring to temperature slowly. Once it gets nice and hot, just spoon it over everything and anything on your plate! 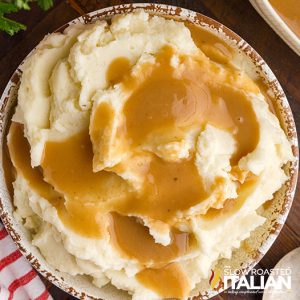 KFC gravy uses the browned bits from frying chicken to season their gravy. If you have browned bits in a pan from cooking chicken, you can start this recipe right in the same pan, adding the butter to the browned bits and continuing the recipe as written. Please note, you will have those bits and pieces in your finished gravy – it will not be perfectly smooth. Using both chicken broth and beef bouillon adds an extra level of flavor to the gravy. You can substitute 1 cup of beef broth for the water and bouillon or just use an extra cup of chicken broth instead of the beef altogether. Whisking the liquid ingredients intoto the flour paste very slowly is the best way to prevent lumps from forming in the gravy. You can use vegetable oil instead of the butter to make gravy. You will still want to brown the oil/flour mixture to add flavor to the flour.