My Creamy Clam Chowder Recipe is the perfect hearty soup to warm you right up. Filled with chunks of potatoes, a variety of vegetables, and soft clams, this creamy soup is so comforting and delicious.

Ready in just 40 minutes, this clam chowder is not only delicious but also so easy to make!

Clam chowder is one of my favorite soup recipes. It’s rich, savory, and makes a satisfying easy dinner on a chilly night.

This white clam chowder recipe is simple – you’ll only need 15 minutes of prep time, and soup will be ready to serve in just 40 minutes total!

If you love homemade chowder, try this Chicken Corn Chowder or this Cheesy Bacon Chowder next.

Or, for more hearty soup recipes, try my 15 Bean Soup with Ham or my copycat Olive Garden Minestrone Soup.

How to Make Creamy Clam Chowder From Scratch

This easy clam chowder is delicious on its own but can also be enjoyed with additional toppings and sides to make the meal more complete.

Try topping it with oyster crackers, bacon crumbles, or parsley.

Or, pair your New England Clam Chowder with a side of no-yeast bread or my copycat Texas Roadhouse rolls.

Leftover clam chowder can be stored in an airtight container in the refrigerator for 3-5 days.

To reheat, place back on the stove and heat on low. Since this creamy clam chowder recipe contains dairy, you’ll need to stir it frequently as you reheat so that the texture doesn’t become gritty.

Can I freeze clam chowder?

I don’t recommend it. Dairy-based soups often change in texture when frozen and reheated, and the potatoes in this chowder can get mushy as they defrost.

This creamy clam chowder recipe is best served day-of, or consumed within a few days.

How do I make clam chowder thicker or thinner?

You can control the consistency as you cook, or adjust if afterwards.

For thinner chowder, add the half & half mixture to the cooked vegetables before it starts to bubble and thicken. If you prefer thicker chowder, let the mixture bubble slightly and keep cooking it until it has thickened.

Want to thin chowder that turned out too thick? Just add a little bit more half & half, and stir until you reach your desired consistency.

Dairy is the key ingredient in the New England version of clam chowder, making it thick and creamy. Other clam chowders — such as Manhattan clam chowder — leave the dairy out, resulting in a more brothy base.

Other Soups and Stews 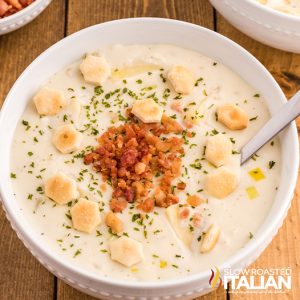 Any kind of potatoes of your choice can be used. If you don’t have half & half on hand, use equal parts milk and cream to equal 1 quart. If you like bigger pieces of clam, use chopped clams instead of minced clams. The half & half mixture will thicken quickly once it starts to bubble, so stop cooking it once it becomes thick and no more lumps are remaining. If you want your chowder to be not as thick, add the half & half mixture to the pot of vegetables right before it starts to bubble and is still a little bit thin. Add the clams at the very end to avoid them becoming rubbery.