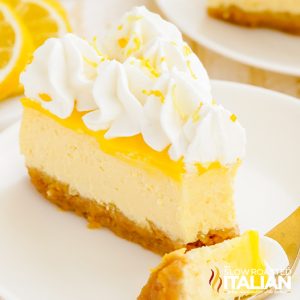 All nutritional information is based on third party calculations and is only an estimate. Each recipe's nutritional value will vary depending on the ingredients used, measuring methods, and portion sizes.

The rights to this recipe for Lemon Cheesecake + Video are owned by TSRI Media, LLC and first appeared on The Slow Roasted Italian website on May 29, 2022. May 29, 2022